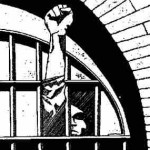 Following massive raid on anarchists on Tuesday night, three people were charged with terrorism and taken into custody. Whole operation police called “Phoenix” started in early morning with house search in dozens of private flats and social center “Ateneo” in the town of Most. Around 20 people were arrested, part of them only questioned and immediately released.

The police story is that the group of people formed “autonomous cell” and planned the attack on a train with army surplus or with Hyundai cars with Molotov cocktails. They were organized group because one of them should have bought gasoline, others should have brought bottles. Police also connect them with a couple of cases of fire attack, most of them funny. In the following article you could see pictures of one of the police car they try to burn down. There is clearly no damage but it is still considered terrorism: http://www.blesk.cz/clanek/zpravy-blesk-praha/291622/anarchisti-policistum-zapalili-auto-kvuli-centru-poliklinika.html

Czech anarchists groups released joint open letter claiming that the only goal of operation is to scare the movement that is recently starting to gain some public support, especially mentioning fight of Prague solidarity network for paying wages in Prague restaurant “Rizkarna” and case of autonomous social center “Klinika.”

Today the MayDay demo took place with 400 people. One of the investigated activist gave a speech there. Next week, anarchist bookfair takes place in Prague, which is one of the biggest action of anarchist
movement of the year.