Call for solidarity with an employee of Řízkárna restaurant in Prague 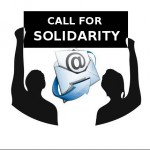 The Solidarity Network from Most (MSS) would like to ask you to send a protest e-mail to the management of the Řízkárna restaurant, which refused to pay wages to its employee. MSS started a conflict with the restaurant and you can support it by sending a protest e-mail to the management via the electronic form (its text can be changed at will) at this link.

Details of the conflict

Mrs Anna S. contacted the Solidarity Network from Most after her son told her about the activities of MSS in the area of unpaid wages. Anna asked us to help her solve the conflict with the manager of the Řízkárna restaurant. She worked in the restaurant for several months. At the beginning she received her monthly wage. However, for December 2013 the employer Vladimír Krulec paid her less than what she was entitled to. She waited, but the January wage was not paid at all. After this experience, Anna stopped working for the restaurant.

In the following months Anna tried to get the money from her former employer on her own. However, he tried to avoid direct communication so that he did not have to deal with the problem and used mostly other employees for communication.

When the MSS met with Anna, the first step was to define the main goal together: the payment of the due wages as soon as possible. After this we started working together with Solis, a Prague solidarity network. Together we composed a letter with a seven-day ultimatum for the payment of the wages. On 13th September 2014 we tried to deliver the letter personally to Vladimír Krulec in the restaurant. Unfortunately, the employee who was present at the place refused to arrange direct contact with the owner. The letter was handed over to her and she promised to give it to the manager. We also sent the letter by post, just to be sure.

Vladimír Krulec did not react to the letter. Seeing that the wages were not paid in the stipulated time, the Solidarity Network from Most and Solis decided to start a campaign together with other groups and individuals in the Czech Republic as well as abroad. The first step is to send protest e-mails addressed to the management of the company which owns the Řízkárna restaurant. You can get involved in this activity, too. Further steps of the campaign will follow until the wages are paid.

For an individual, sending an e-mail is an easy step and if a large number of people do this, the management of the company will receive a clear signal that the payment of the due wages is supported by many people around the world. Our campaign is based on simple logic that it is easy to ignore an individual, but it is much more difficult to ignore international collective pressure.

Moreover, there are other possibilities how to support Anna even after sending the protest e-mail. There are other forms of support either on the level of individual cities or internationally. We will soon publish information with practical advice on how to carry them out in the most effective manner.

Protest e-mail addressed to the management of the Řízkárna restaurant

I hereby join the international protest against the conduct of Vladimír Krulec, who robbed the employee Anna S. of her December 2013 and January 2014 wages, which she earned while working in the Řízkárna restaurant in Prague. I consider this conduct unjustifiable.

The Řízkárna restaurant is responsible for solving the situation. Until the wages are paid, I will inform about this case in the country where I live as well as in other parts of the world. I will also support all forms of protest against such practices in your company.

I hereby declare solidarity with Mrs Anna S. and emphasise my willingness to stand up for her rights.

Name, city, country (and organisation, if applicable) and date.