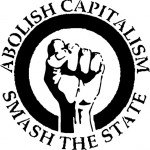 Proletarians, let’s refuse to submit to the anti-terrorist campaign of the state!

The capitalist terrorism against the humanity speeds up everywhere in the world. The raising of foodstuffs price, the massive layoffs and the cut in social allowances, following the current capitalist crisis, throw hundreds of millions of proletarians out into the street and deprive them of the most elementary means of survival.

First and foremost it’s deprivation of our means of life by capital that is terrorist!

To stand up for themselves against the exponential worsening of survival conditions, proletarians take to the street and confront the state in dozens of countries all over the world, and right now in Greece, Italy, and Spain…

The states, their laws and their police harshly suppress any proletarian action (picket line, traffic blockade, sabotage, demonstration, etc.) that hinders sacrosanct “free movement of labour, right to work, to sell, and to buy…”. Struggling proletarians are systematically accused by the state “to take innocent victims hostage” (i.e. citizens who submit to the bourgeois law and order), to intimidate them, and to terrorize them.

It is actually the bourgeoisie that feels terrorized by the fact that merchant property and freedom are being called into question, and this is the reason why it tends to broaden its definition of “terrorism” to any action that breaks with the democratic order. It means thus at the same time:

It is essential to affirm against these bourgeois manoeuvres that:

Solidarity means to struggle anywhere against the state!

Comrades, this leaflet is an expression of our struggling class, copy it, and spread it!